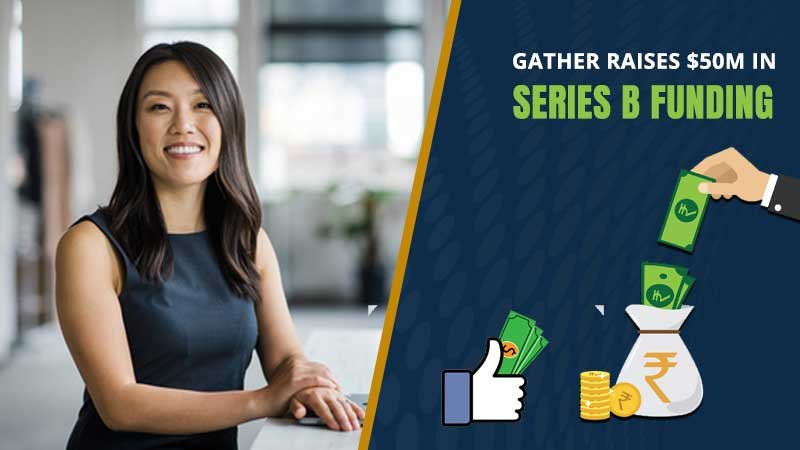 Ever since Covid-19 hit, there have been a lot of companies that started working from home and letting their employees work remotely. However, the trend of working from home doesn’t seem to go away and many continue to work remotely. With that, the interaction has gotten lesser to none. So, with many brands emerging to help people in interacting virtually, Gather has raised $50M in Series B funding. To know more about Gather Sequoia Capital Ventures, in brief, read on.

At this point, it is impossible if you haven’t heard of Zoom or Slack. Because they were everywhere and all we could hear of. Even a part of most of our lives. And if hearing Gather doesn’t ring the bell, we will make it easier for you to understand or recall.

Founded in May 2020, as a response to the ongoing pandemic, Gather is basically a virtual HQ platform that enables you to host anything – from work meetings to talk to friends. You can do it all on Gather. It can be used for any reason, and what makes it stand out from the rest is its 2D animation with the latest functionality.

The platform offers a unique experience to the users by offering an environment where they feel like they are in a place that is no lesser than a video game. If you are wondering how, let us tell you. Gather offers the users to create small avatars which they can use to explore the world and also video chat with the people that they come across on the platform. Since its launch, Gather has been used as a virtual office by many organizations, be it for social gatherings, conferences, or even for friends and families to connect. Gather 50M series Capital Index is big news for the brand.

Sequoia Capital is a renowned American venture capital firm. The firm specializes in investing in seed-stage, early-stage companies, or growth-stage private companies in the technology sectors.

Sequoia Capital was founded in 1972 and its headquarters is situated in Menlo Park, California. As of 2022, its total assets under management value at around US$85 billion, approximately.

Some of its notable highlights of achievement include Google, Apple, Instagram, LinkedIn, Cisco, WhatsApp, PayPal, etc. And according to Phillip Wang, the CEO of Gather, the brand has raised $26 million in a series A round led by Sequoia Capital. So basically, millions of dollars have been invested into the Gather series, Sequoia Capital.

Philip Wang, the Co-Founder, and CEO of Gather had some things to say about Sequoia Capital, “Sequoia helped Unity particularly, the game engine company, and figuring out their business model, which is unorthodox.” He continues by saying how he has always looked at them, thinking about it would be great if he could do something like that with them.

On the other hand, Sequoia Capital’s Shaun Maguire, calling Gather a pandemic phenomenon, said “work-from-anywhere is here to stay. Phillip and (his) team’s motivations to create Gather precede the pandemic.”

Founded by Gerald Rimer in 1976, Index Ventures is a European Venture Capital firm with dual headquarters based in London and San Francisco. It focuses on investing in technological companies, narrowed down to mainly fintech, eCommerce, gaming, security, infrastructure, and mobility.

So now, if you’re wondering what it has to do with Gather? Well, Gather, which is also the provider of a metaverse platform, raised $50M in Series B funding. And its round was led by Sequoia Capital and Gather 50M series Index.

In conclusion, Gather, which had announced a raise of $26M in Series A in March 2021, just within several months has raised $76M and plans to use the funds for continuing the business reach and expanding its operations.

The virtual HQ platform, Gather, announced that it has raised a whopping amount of $50M in a Series B funding round which was led by Sequoia Capital and Index Ventures. The participants involved in the round also included Jeff Weiner’s Next Play Ventures (Chairman and former CEO of LinkedIn), Dylan Field (Figma’s CEO), and Y Combinator.

Ever since its launch, Gather has been used by many as a virtual office. It can also be used for different types of professional conferences. And not only that, but people can also come together there for social gatherings with their families and friends.

The Co-Founder and CEO of Gather shared his comprehensive vision for the metaverse provider brand in a blog post on the official website of Gather town. He said under the heading “why Metaverse matters” that there are a lot of people who will get opportunities – be it for educational purposes or work-related. Metaverse will be open to all, regardless of who they are, or where they are from. He basically emphasized that as the Metaverse becomes an impactful world, people can share their experiences with each other and have more real interactions virtually with their loved ones.

So in this growing world of technology, where investments continue to flow, with mega metaverse brands like Facebook and Meta, the development of a new virtual world is also increasing significantly. I mean, a lot of trading keeps taking place anyway, so only time will tell how this one is going to turn out.

Ans: According to Gather, it has been created with the aim to bring people closer together virtually into one group, collection, or place. Here, people can gather or assemble together from various places.

Ans:Shaun Maguire, on behalf of team Sequoia, says that they described Gather as “Minecraft meets Zoom” when they first came across the platform. And they also said that they couldn’t fit the company into one box as it had various things to offer – video conferencing, gaming, virtual events, etc.

Ans: No, Gather is not an NFT. However, there is an NFT that exists with the same name and provides an NFT mint service. Gather, here, refers to a virtual HQ platform where people can interact with each other virtually via spatial technology in the created spaces.